Here's another article on the public option, theis one from the Wall Street Journal, not considered by some a traditional news organization.

Notice how its language is quite neutral. There's no implied characterization of liberals, conservatives, Republicans or Democrats as good or bad.  The hospitals in the Midwest are not characterized as obstructionist; the point is not even mentioned.  There's no mention of price-gouging either.

The article just lays out the points of contention and who backs which.

-- House Democratic leaders signaled flexibility Friday on how a proposed government-run health insurance plan would operate in the private market, in an overture to centrist lawmakers who want to limit the government's impact on the market.

The issue is at the heart of evolving House legislation that would overhaul the nation's health system, making good on President Barack Obama's call to expand insurance coverage to tens of millions of Americans.

For months, senior House Democrats, including Speaker Nancy Pelosi of , have pushed proposals that would give a government plan big leverage in the marketplace. They would tie payments to doctors and hospitals to the low rates paid by Medicare, the government health program for the elderly. 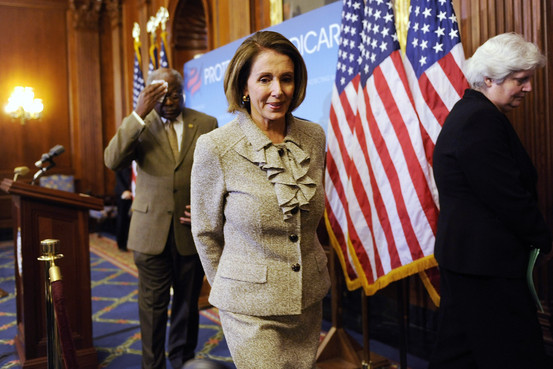 Many liberals argue that such a plan has the best chance of forcing private insurers to lower premiums and out-of-pocket costs for consumers, while also lowering the cost of the health overhaul.

But the speaker and House Majority Whip James Clyburn (D., S.C.) suggested they were open to other ideas, including a proposal that would require the government plan to negotiate payment rates directly with health providers.

Meeting with reporters, Ms. Pelosi said, "There's no philosophical difference" between the more "robust" proposal she favors, and the competing proposal calling for negotiated rates. Requiring the public insurance plan to negotiate with providers would likely result in more generous payouts than under Medicare, and is preferred by many moderate Democrats.

Mr. Clyburn said no decisions have been made. "We are still in the process of determining which public option best suits the majority of our caucus," he said, noting that Democrats were debating four versions of the government plan.

Republicans say any form of the public plan is likely to drive private insurers out of the market and lead to excessive government control. Rep. Tom Price (R., Ga.) said a "remarkable lack of leadership" is resulting in a "hyperpartisan" House. He said the most liberal members of the Democratic Party are writing a health bill that many Democrats don't support.

In the Senate, Democratic leaders are putting their weight behind a proposal that would create a national health plan, but allow states to decide not to participate.

The House speaker suggested she is more flexible in part because prospects are growing that the Senate will embrace some version of a public plan.

"The atmosphere has changed. When we were dealing with the idea that the Senate had nothing, it was really important, again, to go in with the most muscle for the middle class with a robust public option," she said.

Ms. Pelosi also said she is open to giving states the right to opt out of a national plan. "I don't think there's much problem with that," she said. Mr. Clyburn raised doubts that any state would back out. "I can't imagine any state saying to its citizens, 'We're going to expose you to less competition or no competition,'" he said.

The public option is the last major undecided piece of the House's revised health legislation, which could be unveiled next week. Among other things, the bill will be financed by a new surtax on the wealthy, and would expand coverage by widening eligibility for Medicaid, the federal-state health program for the poor. It would set up tax subsidies to help low- and middle-income individuals and families purchase insurance.

Even after that bill is unveiled, further changes are likely, as party leaders work to ensure the measure has the 218 votes needed for passage on the House floor.

"People are where they are, and obviously that's a little short of 218, or we wouldn't be in this process right now," said Rep. Earl Pomeroy, a North Dakota Democrat who voted against the health bill in committee.

—Naftali Bendavid contributed to this article.

Write to Greg Hitt at greg.hitt@wsj.com

Printed in The Wall Street Journal, page A5