I have 4 doctors’ appointments coming up May 1 & 2 in McAllen. I like to make my arrangements early because bus seats and hotel rooms can be in short supply at times.

First order of business was to make hotel and rental car reservations. Along the way I found out that the AARP discount at the hotel I like to stay at saves enough that two night’s savings pays for membership. I guess I knew that for some time, but was too fed up with their political maneuverings to stop cutting off my nose to spite my face. I signed up for AARP.

I like to get into Reynosa, Mexico (there hasn’t been through service to McAllen for about a year now) early because the peak period of people crossing on foot is between around 7AM and 9AM. The bus I take arrives at 6AM and I can make it to the car rental place in McAllen by 9-9:30. A half milligram of alprazolam gets me 7 to 8 hours sleep on the bus. Even though the Internet showed a few seats available on the bus to Reynosa and the buses for the return trip, it was obvious the best seats were blocked for bus company and travel agent use. The next order of business was to go to the bus station and buy the tickets. You can do it online but you have to trust that the system will be up and running at departure time. Experience convinced me that it’s best to just go to the bus station as soon as possible and buy the tickets there.

Going to the bus station can be a 10 minute cab ride for about $2.50 or a 15 min walk plus a 25 cent, 15 minute bus ride. In no hurry and wanting the exercise, I chose the latter. It also gave me the opportunity to check my P.O. box and got to the ATM, a good thing it turned out to be.

At the bus station, there were seven people behind the counter but only one person was actually dealing with customers. One or two of the others were counting cash (shift change?) and the rest were chatting, shuffling papers or on their cell phones. The one guy dealing with customers was slow and struggling to take care of the one customer ahead of. I had experience with this guy in the past and knew he was just slow. I tried to get another agents attention, no luck. They would answer questions but not sell tickets. After about 10 minutes, another agent must have finished what she had been doing and called me over. The customer ahead of me still hadn’t been able to buy his ticket. I gave the agent the details of the trip I wanted, stated that I’m eligible for the Senior discount and she pulled up the seat selection screen. As I would have predicted, 35 of the 38 seats were available. The Internet had shown that only about 6 seats were available. I selected my favorite #7, aisle seat close to the front where it’s quieter on the side opposite from the driver where you get just enough more legroom to make it worthwhile. I paid with my credit card and was off to buy my return tickets from another company.

What happened here was pretty unusual. Normally, if the system is up, buying tickets is quick and easy.

It took only about two minutes at the other company to get to the point of paying for my tickets but after a minute’s delay, the credit card terminal timed out because it couldn’t connect to the system. After trying and failing a second time, my choice was to come back later or pay cash. I elected to pay cash and have all my tickets in my pocket.

So far, 3 anomalous incidents, one of which is “routine” for Mexico, bus company websites not telling the truth about seat availability. The other two incidents, system reliability and “personnel” quirks, are infrequent enough to be truly anomalous.

I got a bus back to downtown immediately on leaving the terminal but had to get off before reaching my stop because the police were blocking off the center of downtown for the evenings Cultural Festival events. That meant only an additional 50 meters on my walk home. Anomalous event #4.

I arrived home to find Cristy just getting out of the shower. Water had filled the cistern while we were out and the landlord had turned on the pump to fill the tanks (tinacos) on the roof. My turn! I shed my clothes and jumped in the shower. Got myself good an wet, lathered up, and at the precise moment I started to rinse, the water started to turn cold. I managed to get reasonably rinsed before freezing or running out of water. The pilot light had gone out on the water heater.

Later in the evening Carol , one of our neighbors, accompanied us to hear Pablo Milanés, one of Cuba’s top Trova singers in Plaza de Armas..

It was a nice evening.
Here are a few photos showing what the Plaza de Armas looked like. 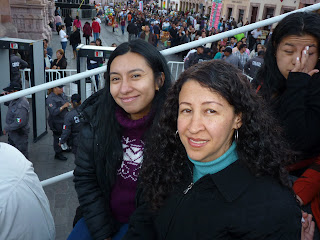 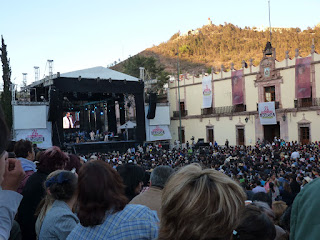 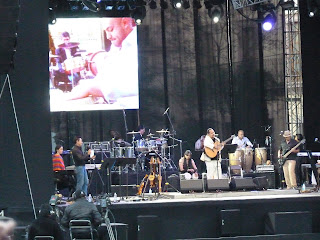 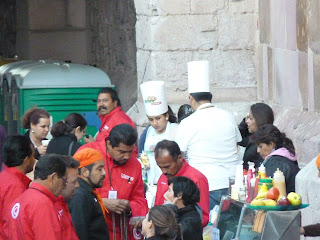 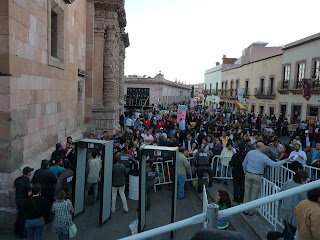 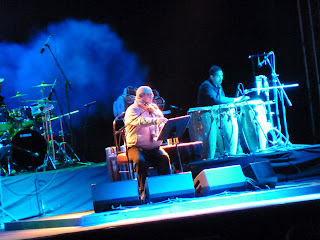