People walking down the street in Zacatecas and small towns in mexico tend to walk to the left, down the middle or even to the right. Some times a group will wander along moving left and right randomly. They'll even stop in the middle of the sidewalk for a protracted gab fest. This kind of street may be the reason. You can see at least three different sidewalk widths in the picture. 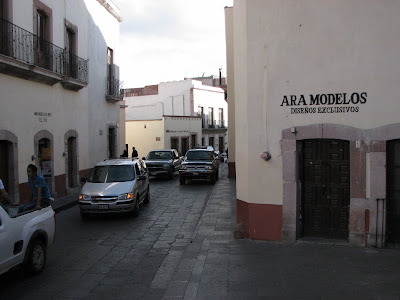 I suppose it is because the sidewalks long after the buildings went up in the absence of zoning laws. I don't think there zoning laws yet.

Anyway, a leisurely stroll can be an exercise in broken field running. You try to predict where the oncoming traffic is NOT going to be. sometimes that means getting into the gutter.