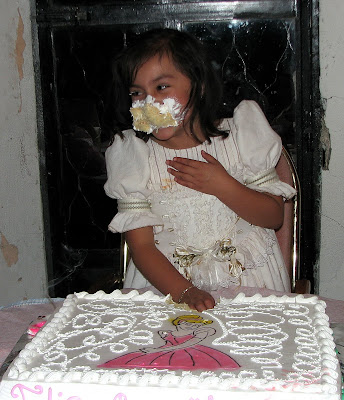 A couple of good examples of Mexican Time ocurred today.

We were invited to a birthday party at 4PM. We stopped downtown to buy a gift and didn't arrive till after 5.

Several guests were already there and eating dinner, but our arrival was taken completely in stride and we were welcomed warmly. We weren't the last to arrive. People came and went for another hour and a half.

When things settled down there was the traditional piñata and birthday cake.

Earlier in the day they were doing some fixing on the gas pipes and they said to leave the gas off till 4PM and they would tell the landlord to turn it back on at that time.

When we got back home at 8PM, no gas.

The gas valve is in a patio frequented by a watchdog and under lock and key. I tried calling the landlord, no answer. One of the other tenants was pulling into the driveway and I asked if he could get into the patio and turn the gas on. No, but he could locate him and let him know. 15 min. later, the landlord shouted out under my window that the gas was back on.

The moral of the story. Get used to the fact that living in Mexico means viewing time as a flexible fluid thing. Don't get upset, it all works out.
Posted by gudgrief at 6:57 PM