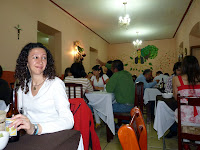 Lazy day today, Mexican Independence Day. Watched the festivities from Mexico City after sleeping in till late.
Last night we went to a restaurant overlooking the main plaza in Zacatecas. Dinner was green pozole loaded with hominy and shredded chicken in a spicy broth over which you pile in lots of shredded lettuce, sliced radishes, and chopped onion. Along with lots of tostadas and beer we were too full for the tamales that went with the meal. they were nice enough to pack us a bunch to make a quick breakfast this morning.
We had a good view fo the ringing of the Mexican version of the liberty bell and the shout of independence which includes recalling the names of the heroes that won Mexico's independence from Spain in the revolution of 1810. This being also the centennial of the 1910 Revolution, the names of those leaders were included. Ground and aerial fireworks followed, topped of by a singing star, Lucero, performing songs from both eras.