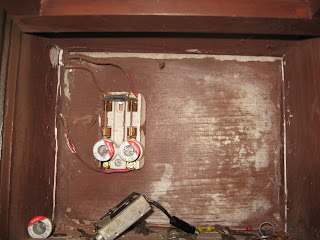 This is the fuse box in my little place.Two, count them two, 30 amp fuses. But that's not all, they appear to be wired in series.

Shortly after I moved in, one blew and everything in the house went out. So, they brought a new fuse, replaced it, and NOTHING. Apparently the fuse wasn't making contact. Pulled the other fuse and what did they find? There was a copper coin under the fuse. OK, so they put a coin under the other one. No trouble since.
On top of that there are only two electric outlets in my living/dining room.That's where I have:
2 computers
2 external hard drives
1 monitor
1 printer
computer speakers
cable modem
cable box
plasma tv
paper shredder
fan
heater
all plugged into two daisy-chained 8 socket voltage regulators.
I wonder how many amps I'm drawing in just this room.
In the kitchen, I have refrigerator, toaster oven, coffemaker, blender, juicer, coffee grinder all plugged into one socket with a surge protector. Well, I don't use them all at once.
Smoke detector? What's a smoke detector?
Well, there's nothing flammable in the structure of the building only a bit of furniture. Worst case, I'm only 5 ft. from the balcony and can let myself down from the second floor without breaking a leg.
Posted by gudgrief at 5:07 PM