I wonder . . . after a year in Zacatecas 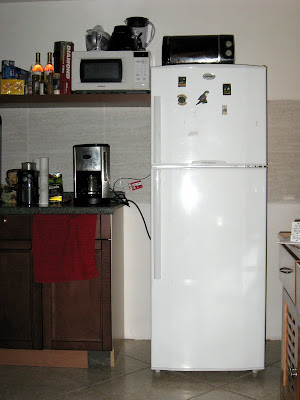 When I walk down the street, people must think I'm drunk or on drugs.
The sidewalks are so uneven and there are so many obstacles (driveways 6 in. above or below sidewalk level, steps going up or down at odd intervals,) I'm constantly stumbling.

Then there are trees that are so wide or so low you either bob and weave or get off the curb and walk in traffic.

Walking in the street isn't much better. The streets are paved with stone, nothing level about the surface.

I wonder if I'll ever get used to it like the locals.

On a totally unrelated note:

The housekeeper has got me eating things I never would have touched before. Nothing exotic. Just zucchini, baby briccoli, and baby cauliflower. She makes a chicken soup with a really rich stock and lot's of chicken meat in which I don't even taste the veggies.

Which reminds me. The refrigerator in the new apartment was only home office size. As a condition of the lease, the landlord promised verbally to replace it with a bigger one. Last week, I asked when they'd bring it. He sent his handyman around with the message the they were sending it out to be tested. Some kind of stall? The landlord is a lawyer after all.

Nope, the handyman brought the bigger one today. More than twice the size of the original, frost free and works like a charm. All-in-all, the landlord has bent over backwards to make sure everything is right in the apartment. That's saying a lot for a lawyer.

My housekeeper has been cooking in her home and had been bringing a week's worth of food each week. With the baby fridge, only 3-4 days would fit so she was cooking and bringing food twice a week. This will be easier on her and on Cristy and me. Once Cristy gets here, she'll take over the menu planning. Introducing some dishes from Michoacan will be a treat.