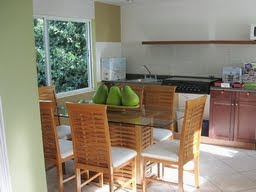 By any standard, our little house is luxurious.
In Mexico, the word has a slightly different meaning.

Even here, showering can be challenge or adventure.

We have an 1100 liter water tank on the roof fed by a 15,000 liter cistern underground. Why all that plumbing?

The city doesn’t pump water 24/7 making the rooftop water tanks called tinacos a standard fixture in most Mexican homes. The 15,000 liter cistern is the added luxury assuring we won’t run out of water if the city fails to pump for an extended period; a pump fills the tinaco from the cistern.

Even in a city where nighttime temperatures can get down to freezing and below, central heating it's almost unheard of. Gas for the stove comes from a 500 liter stationary tank and there’s another gas connection in living room but nothing in the bedroom. The landlord is going to have a pipe run to the bedroom soon.

Right now, I have two roll around gas heaters with 20 liter portable tanks. The
downside is that the tanks have to be taken to an LP station to be filled. Soon
we’ll be able to connect the heaters with hoses in the living and bedrooms.

The water heater is an on demand tankless type. Being outside in the cold, it takes a little while to send hot water to the faucets. Originally, the water came out nearly boiling but an adjustment a couple of days ago fixed that so the water is just right for showering. This technology is so new to the area, plumbers aren’t really up to speed and it may take a while longer to get things set correctly. If you attempt to add just a little cold water to the mix, the heater shuts down and all you get is cold. Clearly, further tuning is needed.

Want to take a shower? It’s not so simple as just turning on the water and jumping in. First, you turn on the heater in the bedroom. Second, roll the other heater into the bathroom and turn it on. Now, wait a half hour till both rooms get warm.

On leaving the shower, towel off and enjoy the heat till you’re completely dry.
Now, run to the bedroom before freezing. Luckily, it’s only 6ft.

You’ve left your clean clothes in front of the heater. Dress and lay back to enjoy the warmth. There were times we had to go through resetting the system 3 times before we were completely showered and rinsed.