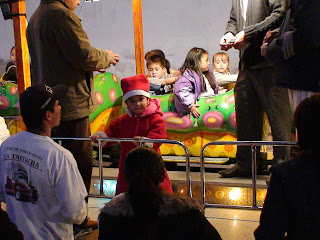 Saturday December 12, 2009, the Virgin of Guadalupe Day, was a beautiful sunshiny day and we took advantage of the fine weather to take the half-hour bus ride to the fair and festivities in Zacatecas' neighbor city of Guadalupe.

It was the first time for both of us and the first surprise was that the 3 mile stretch of boulevard that connects the two cities has a fairly long strip of modern upscale shops, restaurants and hotels, a sharp contrast to the colonial atmosphere of center city Zacatecas. We'll need to go back and explore.

We got off the bus where most people got off and followed the crowd that led to a large church. Monks in front of the church were blessing passing cars and charros on horseback with holy water. On the plaza in front of the church a group dressed in Huichol Indian costumes were doing a traditional dance in honor of the Virgen of Guadalupe. On a corner near the plaza, we passed a stand selling what look like iced tea. It was tepache made from pineapple, brown sugar and cinnamon left to ferment for 3 days. The way it is served is you sprinkle some powdered chile in the bottom of a glass, throw in some ice, pour in the tepache and finally squeeze half a limon over it. Very sweet, spicy and lemony all at the same time; quite refreshing. Even Cristy had never heard of it.

Tepache in hand, we meandered over to a stage where they were doing tranditional Mexican dances, after which we strolled through the alameda just taking it easy.

After that, we wandered over to the fair just to enjoy watching the kids and parents have fun on the rides. Dodge 'em cars were the big draw.
The whole atmosphere reminded me of the holiday outings, parades and carnivals we had in the 1950s in Huntington, NY.

On the way back to the bus stop, we picked up some tangerines because we hadn't seen any nice ones in Zacatecas and just had to stop for another glass of tepache. Then a block from the bus stop, we came upon a stall selling cheese and chile tamales. "Oh! I just love them!" went Cristy, "Let's get some to take home for supper." And we did. They were delicious and were a great finish to an enjoyable day.
Posted by gudgrief at 1:10 AM