Rainy Sundays Never Get Us Down 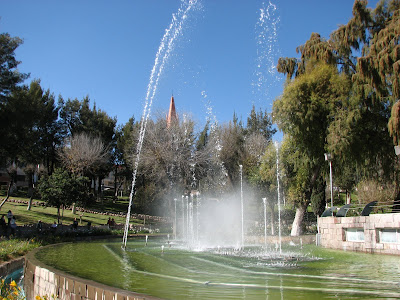 Sunday evenings, we've gotten into the habit of taking a stroll in the park, then going for dinner at a modest little restaurant that has excellent steaks and a variety of Mexican dishes. Afterwards, we go to a little hole in the wall that does a great job on crepes with Nutella and fresh strawberries. As soon as we walked out the door, it started to drizzle. We hesitated a minute but decided to chance it but limit it to the restaurant and crepes. We were only slightly damp after the 10min. walk to the restaurant. Tonight we both chose tacos, more on that later. And the crepes were cream cheese with blackberries just to be different. We stopped by the neighborhood supermarket before heading home. The rain, which had stopped while we were eating, began again, now something more than a drizzle. On leaving the market, it took a while to flag a cab and in spite of umbrellas we were beginning to feel wet. As soon as we got home, a downpour started in earnest, lightning, thunder and strong wind. This was the first rain in almost 3 weeks. I guess the rainy season isn't quite over!

At the risk of repetition, I feel compelled to describe how they serve tacos in sit down restaurants everywhere I've been in Mexico. They lay out 4 or 5 warm, freshly baked 3.5" soft tortillas on a plate that's too small so they overlap by 50% and Dump the meat or meat and cheese mix on top. The meat is hand chopped much like they do in Japanese restaurants so it's small chunks rather than the ground mush at Taco Bell. Add some grilled onion and a hefty helping of pico de gallo and there's no way there isn't going to be a whole lot left over. No problem, just ask for more tortillas. Tonight they brought 5" tortillas instead of the smaller ones they served to begin with. I easily got 2 well filled tacos with those. If you remember your formula for the area of a circle, you'll be able to verify that a 5" circle has over twice the area of a 3.5" one. So those two additional tacos equalled 4 of the smaller ones meaning the 5 taco order actually yielded 9. Not only good eating, great value.
Posted by gudgrief at 7:39 PM