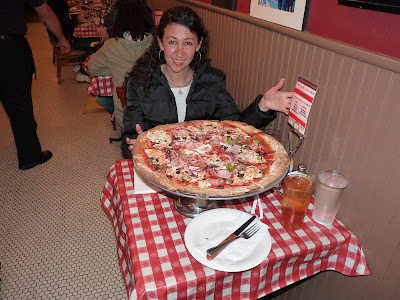 Where to start? The photo above is as good as any.

Pizza at Lombardi's, first pizzeria in the US. Like nothing in Mexico or available at any of the "white bread" chains in the US. Fairly thin, crisp crust, black on the bottom but not burnt, exploding with flavor. Add Jewish deli, the whole schmear, corned beef, pastrami, knishes. We had to have pizza and deli twice each. Real danish, tender, flaky and just a hint of crispness. Then there was Pad Thai, hot dog from a pushcart. Even the Ruby Tuesday's on 42nd St. was good for a change of pace.

We stayed at an old, cramped hotel for a reasonable price. Great location, right on Riverside Drive with a great view of the Hudson and park. Good, safe neighborhood with easy access to subway and lot's of markets and restaurants.

Cristy was blown away by the architecture, from the brownstones to the apartment houses to the skyscrapers as far as the eye could see, making even boulevards dissolve into alleys in the distance.

The size and scope of the Metropolitan Museum of Art, just the size of the building was eye-popping for her. She remarked on so many people walking the streets at any hour day and night more than once.
We were lucky to have a good bit of fall color and that added another point of wonder for someone who hadn't been in the Northeast before.
"West Side Story" was extremely well done and this updated version included a lot of Spanish seemingly done just for Christy.
We hit Grand Central Station around rush hour. Cristy was surprised at the crush of hurrying humanity, the vastness of the building and that there was a market selling just about any kind of food right in the station
We wandered by Rockefeller Center at night just after they opened the ice skating rink for the season and were treated to a live concert while watching the skaters.

The weather was strange the night we went to the Empire State Building. They said there was 10 miles visibility when we bought our tickets. It was completely socked in as we got out of the elevator producing some weird effects on the nearby buildings. In a few minutes the fog/clouds blew away giving a clear view for 360 degrees. The fog kept blowing in and out while we were there creating something special. Videos coming with the rest of what I shot in NY. It may take a few days/weeks to wade through it all.

We also spent a good bit of time wandering through Central Park enjoying the weather, fall color and people watching.

Can't forget 5th Av. by day and by night. Ditto times Square and the Theater District and Macy's 34th St. A whole block, 8 stories; nothing like it in Mexico. Took the opportunity to buy a much needed down coat for Christy. Zacatecas is not Cancun or Zamora, for that matter, weather-wise!

Can't forget the Circle Line Cruise around Manhattan for great views of the city.

An unforgettable trip. Lot's of photos and some video coming. Stay tuned.
Posted by gudgrief at 4:39 PM